The restaurant industry employs a lot of people: more than 10.2 million workers, according to the U.S. Bureau of Labor Statistics, of which about 5.3 million are employed in full service restaurants. From chefs to servers, from managers to maintenance, the restaurant industry’s workforce is its lifeblood. It is also one of its greatest weaknesses, particularly when it comes to food safety. High turnover forces restaurant operations to struggle with recruiting high-quality staff and then having to work harder to get them up to speed on policies, practices, and procedures. Even then, errors run rampant – as can fraud and theft.

Altogether, the workforce costs restaurants more than just their paychecks, and the cost of labor relative to revenue can be a major contributor to unnecessarily thin profit margins. According to point-of-sale technology provider Toast, average restaurant sales per full-time equivalent (FTE), non-supervisory employee in 2015 was $56,000. Compare that to $226,000 per grocery store worker.

Here’s the good news: technology can answer almost any vulnerability an employee potentially introduces. From finding high quality employees – and then keeping them – to driving down error and fraud even as productivity improves, restaurant and food safety technology can rescue restaurants from their weakest link. Here’s how.

Recruiting is the top problem facing restaurant operators, according to the “2017 NRN Operators Survey” from Nation’s Restaurant News.

Other studies support that finding. Restaurant industry analysts at People Report, an analysis of restaurant industry trends from Dallas-based TDn2K, have found that 44.9% of operators are very concerned about turnover specifically. No wonder: QSR Online reports that restaurant employee turnover is at a “staggeringly high 66%.”

On the surface, high turnover in the service industry is understandable. Most restaurant employees – from wait staff to kitchen workers – are using the job to bridge some kind of gap. They want to do a good job, but the transient nature of the restaurant industry’s workforce means they feel less loyalty and are less likely to view their role as a career.

But make no mistake: deploying technology can have a huge impact on recruitment and retention.

Technology is second-nature to today’s workforce; it’s trying to get things done without technological tools that cause problems for them. This is particularly true of the younger generation of workers. Researchers from PwC’s found that a clear majority (59%) of Millennials say that an employer’s provision of state-of-the-art technology was important to them when considering a job.

But it has the same effect for employees of all ages. One of our clients, a small local chain, recently hired a new 40-something manager who had previously worked for 12 years as a General Manager at a Big Box, nationwide chain. Why did he move to a smaller operation? In his words: “I was blown away when they started showing me the different technology that they use within the stores.”

Technology makes it easier to do their jobs.

One major reason technology can have this kind of impact on recruiting: technology makes people better at what they do. That PwC research report also found that four out of five respondents (78%) believe that access to technology makes them more effective at work.

That particularly helps with employees with skills or language gaps. Many restaurant workers do not speak English as their primary language, for example, which makes language-intensive tasks (like checklists, logging, and reporting) take longer and more difficult to complete.

Technology can streamline these tasks and easily incorporate visual cues.

A digital checklist, for example, can be completed with a minimum of taps and swipes, and wireless probes can automatically fill in temperature data in just three or four seconds. The apps are highly directive with visual cues that lead the user through the process, step by step. It makes an otherwise tedious and time-consuming task simpler than sending a text message. Although our focus is on food safety, it’s worth noting that other restaurant technologies also have similar beneficial effects here. Consider handheld server tablets. Instead of manually relaying orders to the kitchen – another time-consuming process prone to error – servers can place and communicate orders directly from the table. This reduces errors, speeds up service, and makes the dining experience easier on everyone.

The example of the server tablets does more than just streamline the ordering process; it also lines the servers’ pockets with extra tips. QSR Online reports that the faster table turn and higher customer satisfaction that results from such technology yields a “30% tip increase due to increased efficiency.”

A comparative case study of the restaurant markets in San Francisco (where compensation tends to be higher) and the Research Triangle in North Carolina (where a wider spread of wages means lower wages for entry-level workers) illustrates how higher compensation yields lower turnover and greater stability (see the figure below: turnover in Research Triangle is nearly double San Francisco’s). 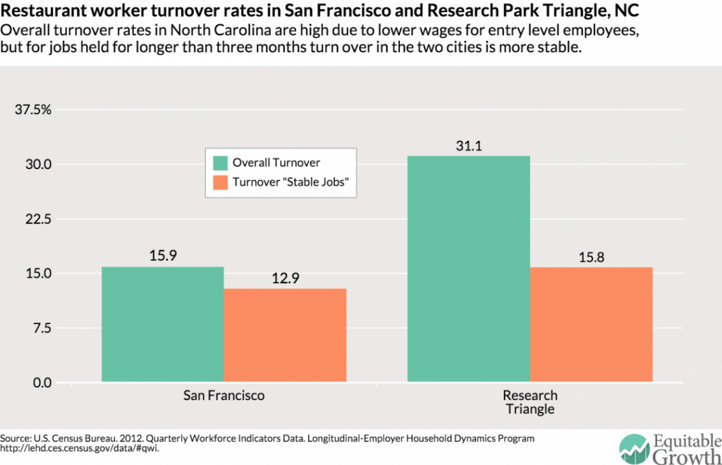 « 5 Practicies to Get More Value From Your Restaurant Checklists