The ComplianceMate Sensor Smart Kitchens system has been awarded IOT Innovator of the Year at the IOT/WT Innovation World Cup®, part of the Mobile World Conference in Barcelona, Spain. In addition to the award, The Sensor Smart Kitchens system was subsequently inducted into the Innovation World Cup® Hall of Fame. ComplianceMate was the only winner from the United States with all others coming from Europe.

Finalists were selected from approximately 1,000 submissions received from around the world, and of those 32 finalists, from eight segment categories, each were required to pitch their ground-breaking IoT tech solutions to a select panel of leading IoT industry experts. The Sensor Smart Kitchens system competed in the Retail category for their development of temperature sensors that leverage the advantages of cutting-edge LoRa WAN wireless communication technology. This new temperature sensor is part of ComplianceMate’s ongoing commitment to offer the most technologically advanced solutions to improve food safety programs as part of their overall service offering. 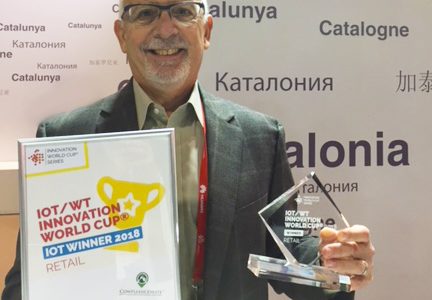 “We are beyond honored to receive such an important award,” says Steve Getraer, President of CM Systems. “We would like to thank all our employees for their hard work and dedication, as well as our development partners, Laird Technologies.”

Paired with the cloud-based ComplianceMate app, the Sensor Smart Kitchens system enables users to continuously monitor and record temperatures inside any cold holding units or other temperature-controlled equipment. The system generates user alerts automatically any time temperatures go out of specification, so users can prevent food waste and reduce the risk of food-borne illnesses.

A powerful LoRa WAN radio is the most effective device to date to meet the many obstacles encountered in a commercial kitchen facility. Its 915 MHz (and 868 MHz in other countries) radio signals can successfully penetrate the rugged materials present in a commercial kitchen with no remediation required (e.g., drilling into cooler walls) and can transmit much further than other commercially available temperature sensors.

ComplianceMate’s award-winning entry can be viewed in the Innovation World Cup® Hall of Fame at http://www.innovationworldcup.com/hall-of-fame/iot-wt-innovation-world-cup/.