How the Internet of Things Builds Capacity for Automatic Temperature Logging

Data analytics is extremely valuable in guiding the workflows of food service, healthcare facilities, and other types of organizations. Those benefits of the data are increased even further when it’s possible to access the information more readily. Preferably, data should be easily and immediately available—and the Internet of Things is an important emerging innovation that can help organizations realize this goal.

The Internet of Things (IoT) is a relatively new concept in tech circles that describes a class of discrete devices, usually single-purposed in nature, that are each connected to the internet. One example of this concept would be a baby monitor that allows you to check on a sleeping child by consulting an app on your iPhone, even when you’re away from the house or even in another part of town.

In the public health field, the Internet of Things provides informatics on a small scale, by using devices in critical areas to capture and transmit data, in real time, relating to variables such as the chemical composition of a public pool or the temperature in a restaurant’s refrigerated food-storage unit.

Devices record specific data according to a predetermined schedule, such as once a minute or once an hour, and store this information to internal memory or upload it to the cloud where it can be accessed by anyone with the proper permissions. Many of these devices include an alarm that will send an alert once a certain data threshold has been exceeded. Alerts can be sent automatically via any combination of email, SMS, onsite alarm, visual indicator on the device, or phone call.

Although this technology is still in its early stages, IoT monitoring will become increasingly commonplace in the coming years, and food and health professionals should be prepared to embrace this method of monitoring business processes.

The market for IoT technology is rapidly growing. It is especially useful for complying with the standards set forth by the Food Safety Modernization Act (FSMA), which among other things calls for enhanced surveillance of food production processes. This has the effect of placing more responsibility for food safety directly on those entities involved in the production process.

“FSMA really opened the door for technology to be introduced into public health surveillance systems," says Timothy Akers, professor of public health at Morgan State University. “I see this technology inevitably becoming a requirement in food safety; it’s a great way for local health departments and other federal agencies to monitor and protect public health."

IoT technology also aligns with the fourth hazard analysis and critical control points (HACCP) principle, which recommends that "monitoring should be continuous." One HACCP manual for retail and food service establishments recommends the purchase of a “data logger to record cooling overnight."

Akers and Cynthia Tucker, PhD, MBA, RDN, LDN, who belong to the research faculty of the nutritional sciences program at Morgan State University, conducted a pilot test of a food safety informatics device at a student center on the campus, in what was arguably the first study of its kind. Over a 24-hour period, the sensors detected multiple breaches of temperature thresholds in the food service area. The study successfully demonstrated the benefits of automated temperature monitoring in cold and dry storage areas as a proactive public health measure.

This sort of IoT sensor monitoring helps promote FSMA principles: “These systems enable restaurants to be proactive instead of reactive, which is one of the stated goals of FSMA," Tucker explains. “Capturing this information in an automated, electronic manner is more credible than paper and pencil and helps them protect the consumer. Nothing can be erased or entered at the last minute when you see an inspector walk through the door. In fact, it will make the health inspection run even smoother, as it speaks to how they run their organization." 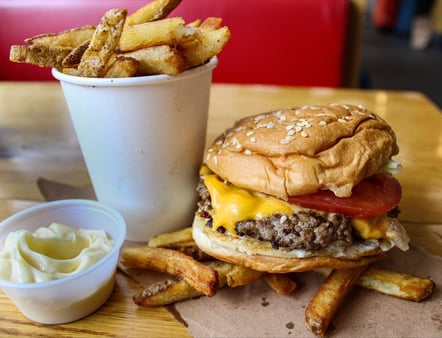 The popular fast-food chain Five Guys Burgers and Fries™ has been using informatic technology since 2009 to record temperatures in coolers and prep rooms on a minute-by-minute basis, which aids its HACCP-compliance efforts and helps reduce food waste. The brand that the company uses, ComplianceMate™, provides each restaurant with a Bluetooth probe, a web-enabled device that automatically uploads to the cloud all the data gathered by employees as they perform checklist inspections.

“Paper logs are only as good as the people who actually fill them out," says Jim Gibson, VP of food safety and quality assurance at Five Guys. “When I heard about [ComplianceMate] technology, I thought, ‘This is a great tool.’ It speeds up the time it takes to temp products, and provides automated, documented, and validated data that is visible to those who need it—the store, managers, corporate, and local regulators."

During a health inspection, restaurants are legally required to present their food safety logs for scrutiny. Although these logs aren’t usually a major factor in the inspection, they do help to prove the facility’s adherence to proper monitoring and management practices. Jeanelle Rogers, a health inspector with Fairfax County’s Division of Environmental Health, explains, “It’s not the sole evidence that we use when capturing temperatures during inspections, but it does make us feel much better about the facility. They can catch a problem even when we aren’t there and do something about it. It helps them demonstrate knowledge and control."

Data electronically captured with temperature monitoring devices can also aid in investigating foodborne illness incidents. Gibson notes that Five Guys consulted its recorded safety data “about twenty-five times" in a four-or five-year period to provide proof to health departments that the company was not at fault for food-poisoning incidents.

Although health departments cannot endorse a specific type of IoT temperature sensor or other monitoring device, they may be able to make recommendations that can assist the compliance process. Some agencies have taken to giving awards of excellence to restaurants that go above and beyond to ensure the safety of patrons. Facilities that take a digital approach to food safety, with automated software and temperature monitoring systems, can be formally recognized in this way.

It may also be possible to award restaurants that have reduced waste and saved money with help from their web-connected devices for temperature monitoring. Gibson admits that temperature monitoring sensors enabled Five Guys to proactively avoid 300 incidents of cooler failure in a five-year period.

In the future, regulatory agencies could extend the range of IoT monitoring technology as a means of overseeing foodservice facilities. Agencies could, for example, view stored data directly in the cloud. Or they could possibly pool all this data from grocery stores, full-service restaurants, and other food-handling businesses to form a national repository for in-depth analysis.

As Tucker, Larkin, & Akers’s study puts it: “Public health is confronted with a myriad of challenges … that can go unexamined without standardized data collection systems. The most significant challenge to establish a public health imperative has been educating policy makers and federal, state, and local regulators about the hazards of contaminated foods that are consumed by people in both public and private foodservice facilities. In contrast, if mandated, industry adapts quickly when evidence-based policy helps to guide industry down a path of efficiency." (Tucker et al., 2011).

The foodservice industry stands to gain a great deal from IoT monitoring. These systems are relatively inexpensive and easy to maintain. As Gibson explains, “With anything in food safety, it’s kind of like insurance—you’re purchasing something that hopefully you’ll never have to really use, if that makes sense. Some look at it as throwing money into a hole. But really it's not a matter of ‘if’ it’s going to happen but ‘when.’"

By automating processes relating to temperature monitoring, businesses can reduce labor costs, provide enhanced customer service, and minimize the risk of food-borne illness. Foodservice businesses need to be open to the opportunities offered by this technology.

This is a summary of an article originally written by Darryl Booth, MBA. The original article can be found at: https://link.gale.com/apps/doc/A414693615/HRCA?u=googlescholar&sid=HRCA&xid=46586b9f