Even today, in 2017, while sales are on the rise again, they are still falling far short of previous performance. As Nation’s Restaurant News writes, “On a two-year basis, same-store sales are still down 11.9 percent. That shows the chain has a long way to go to recapture customers it lost during that fateful 2016.” (See their chart below illustrating Chipotle’s pre- and post-E. coli performance). 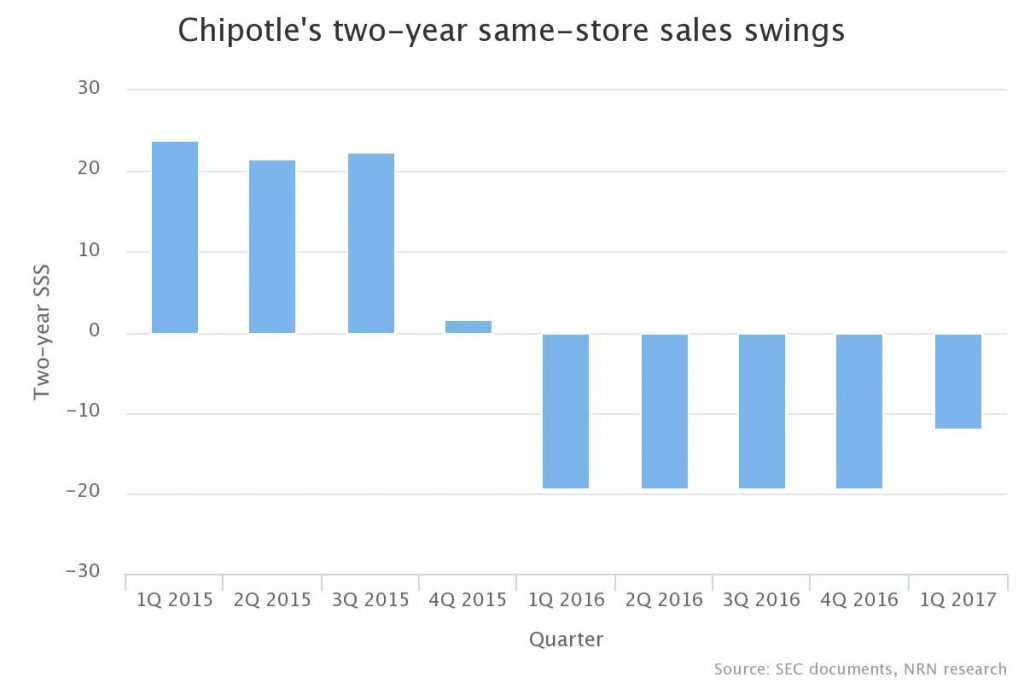 But let’s be honest: it could be worse. Chipotle could have just gone out of business.

Instead, the nationwide chain benefitted from having over two thousand locations and billions of dollars in annual revenue. Its deep pockets provided enormous resources to weather the storm and absorb the costs of legal action taken against the chain, brand new food safety technologies and procedures, an aggressive public-relations campaign, and, of course, massive loss of business.

Jack in the Box is another example of a big enterprise surviving a terrible illness outbreak. In 1993, a tragic E. coli outbreak at dozens of Jack in the Box stores sickened hundreds and killed four; worsening an already terrible situation, most victims were children.

Twenty-five years later, Jack in the Box is still around. In fact, its complete overhaul of food safety operations set new standards for the fast food industry, much as Chipotle has implemented leading new high-tech food safety protocols at its stores. But once again, Jack in the Box is also a nationwide chain with billions in revenue. Like Chipotle, it had the resources to be able to absorb the costs and re-organize its food safety program.

Could a smaller chain or standalone restaurant have survived a similar outbreak?

A top performing independent restaurant might make anywhere from several million dollars to $47 million annually, according to Restaurant Business Online. That’s an impressive take but may not be enough to survive closures and other consequences of a foodborne illness outbreak, whose costs include:

Net profit margins for the industry as a whole have been increasing since 2008, but few independent restaurants could stand to lose three years of earnings growth, like Chipotle, and still handle the added costs of a foodborne illness outbreak.

Smaller restaurants and food service providers must rely entirely on prevention for their survival. The good news: deploying enterprise-grade equipment and technology aimed at small restaurant prices is very doable, and the affordable costs of prevention are just a tiny fraction of the devastating costs of cleanup.

« 5 Ways Your Restaurant Checklists are Underserving You

How Digitizing Checklists Makes Compliance with the FSMA Easy »